There were multiple car crashes in Dayton today reported in the news. Rain apparently was a factor but does not serve as a legal excuse. At least three crashes were reported on interstate 75.

Within several hours of each other the Dayton Daily News reported there were multiple crashes on I-75 southbound in Dayton, Ohio County of Montgomery. The crashes occurred between Stanley Avenue and Benchwood road. Anyone familiar with the area would not be surprised that numerous crashes have occurred there.

The Ohio Department of Transportation’s Buckeye traffic site is a good source for traffic information. Also the local news and Television and internet web sites for the Dayton media commonly report on these car crashes. Often the information is sketchy and all of the details and injuries are not immediately known. It can be seen as a disservice to many car crash injury victims that it is often reported that there were no injuries when in reality there were injuries but they were not life threatening.

One of the crashes involved a Fedex truck that was apparently caused by a car driver striking the truck. These cases of drivers hurt on the job by the fault of another in traffic crashes call into play the workers compensation law as well as insurance claims law. Each area can affect the other area adversely especially if experienced guidance is not consulted. Bad evidence in one area can corrupt the other claim and even cause it to be defeated. 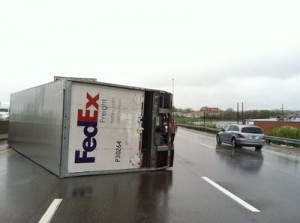 What is is common with these crashes was the rain and a construction  site. One may wonder why these areas are commonly involved in car truck and motorctycle accidents with significant injuries. It is law enforcement’s contention that drivers are not slowing down. Additionally the altered and unusual nature of the lanes caused by the construction can be a recipe for disaster.The highway patrol sometimes has a know it all attitude. These officers often risk life and limb to help injured drivers and in fact they suffer many injuries themselves caused by careless drivers.
No wonder they sometimes seem jaded. although acknowledged as superior when it comes to accident investigations I have seen critical mistakes made in their accident reconstruction. When serious injuries or deaths occur and fault is an issue it’s best to have an attorney hire a traffic engineer accident reconstructionist.

Rain is Not an Excuse for Negligent Driving

People need to slow down in the rain. Stopping distances are increased, especially as the rain just starts oils leach from the roadway making for slicker roads. In severe downpours standing water on the streets and highways can cause hydroplaning. Insurance will try to use this as an excuse to deny righteous claims.

Two persons were caused to die in a car crash this past Sunday on Interstate 75. The Moraine police department was the investigating police agency for this crash. This was a one car crash.

It was reported that the automobile ran off the road and hit a pole. The fatalities reported were Bridget Sizemore and Robert Oliver. The families of these individuals will never be the same. Death changes everything forever. But when the tragedy could have been prevented the wounds can run even deeper. Studies show there never is a true emotional recovery for the surviving loved ones.

The police were still investigating. Please come forward and call the Sgt Keith Leach of the Moraine police department if you have any information or witnessed this crash. this crash occurred near Dryden road just south of Kaplan college.

Anthony Castelli attorney is an Ohio car accident and personal injury lawyer. Call 937-306-6410 to speak with him.

On September 29, 2016, Warren Stevens, 75, of Urbana, Ohio, as killed in an auto accident at the intersection of North Ludlow Road and Kanagy Road in … END_OF_DOCUMENT_TOKEN_TO_BE_REPLACED